SCHENECTADY, N.Y.—February 25, 2021— Distributed Solar Development­­ (DSD) today announced the completion of a custom solar panel carport it designed and built for IKEA Baltimore. Initial results have exceeded expectations as the Baltimore location has seen an 84% decrease in the amount of energy needed to be purchased between September – December 2020, equating to a 57% cost savings for the store.

“IKEA is a clear environmental leader that sets the bar high for other global organizations.”

This is the first of eight commercial solar installation projects DSD will develop for IKEA U.S. stores in Maryland and California, which are on track to be completed in 2021. The projects will help propel IKEA toward its goal of being powered by 100% renewable energy while increasing energy efficiency by 2025.

“IKEA is a clear environmental leader that sets the bar high for other global organizations,” says Erik Schiemann, CEO at DSD. “We’ve helped IKEA maximize its solar energy generation and expand its solar storage capacity, and we’re currently reviewing additional facilities for future solar project locations. With each installation, IKEA moves closer to its ambitious sustainability goals and we’re glad to be a part of that mission.”

The additional seven locations include IKEA College Park in Maryland, as well as IKEA Burbank, Costa Mesa, East Palo Alto, Emeryville, San Diego and West Sacramento in California. When completed, the eight solar panel carports will collectively provide roughly 10.7 GwH of yearly production – the equivalent to taking 1,644 cars off the road in one year and planting over 125,000 new trees.

Initial results have exceeded expectations, as the Baltimore location has seen an 84% decrease in the amount of energy needed.

DSD’s innovative solar canopy designs enable longer spans of canopy that are more energy-dense and require fewer support beams than other solutions on the market, which reduces costs and causes less disruption of available parking spaces.

Out of the eight projects, five of them include energy storage systems (ESS) with a collective capacity of about 5 MWhs. This system allows the retail locations to store solar energy for later use, making clean energy available whenever it’s needed. Large retail sites like IKEA’s are often ideal candidates for combined solar and clean energy storage because of their fixed operating hours and predictable use patterns. 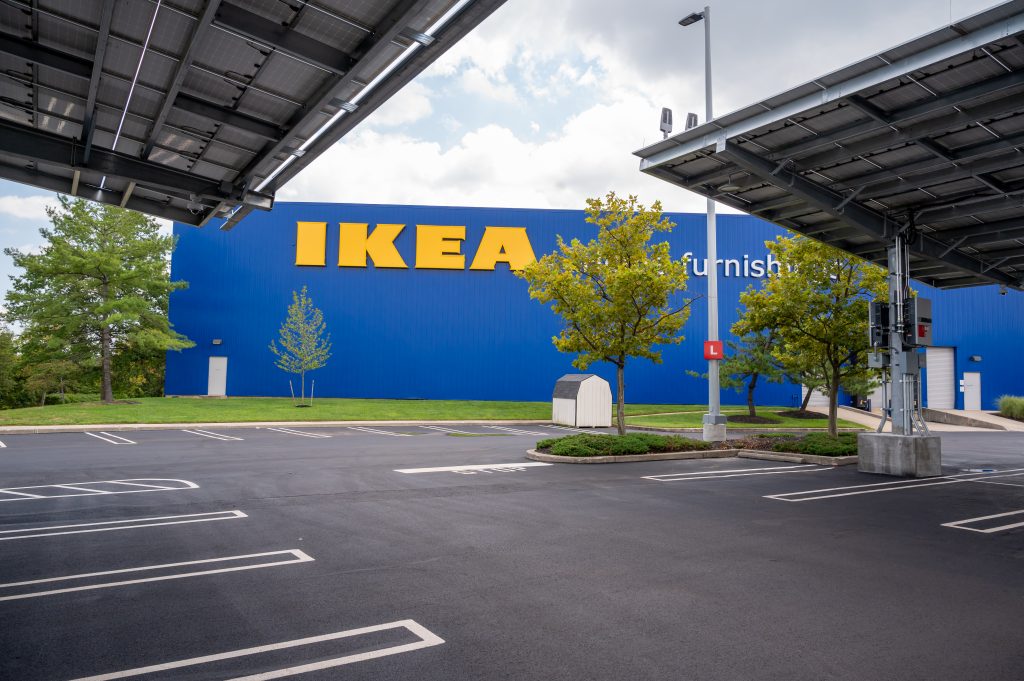 DSD’s new carport at IKEA Baltimore is the first of many solar-project rollouts, scheduled on both coasts, to help the company reach its ambitious climate positive goals.

“At IKEA, we aim to have a positive impact on people and planet, which is why sustainability is embedded in every part of our business. We currently have 54 rooftop solar arrays atop 90% of our IKEA U.S. locations and Ingka Group, a strategic partner in the IKEA franchise system, has invested in two solar parks with 403-megawatt capacity in Utah and Texas. This addition of eight solar car parks is the latest in a series of investments IKEA has made in renewable energy, and marks a significant step forward in our goals to be climate positive,” says Jennifer Keesson, Country Sustainability Manager, IKEA Retail U.S.

IKEA has long been committed to investing in renewable energy to meet its sustainability goal of becoming climate positive by 2030. In the U.S., the company currently owns 104 wind turbines, two geothermal properties, 240,784 solar panels and 143 EV charging stations across 51 properties. In 2020, Ingka Group committed to investing 600M EUR (more than $700 million) into companies, solutions and its own operations to transition to a net-zero carbon economy.

Distributed Solar Development (DSD) is transforming the way organizations harness clean energy. With unparalleled capabilities including development, structured financing, project acquisition and long-term asset ownership, DSD creates significant value for our commercial, industrial and municipal customers and partners. Backed by world-leading financial partners like BlackRock Real Assets and rooted in our founding at GE with a 120+ year legacy of innovation, our solar energy team brings a distinct combination of ingenuity, rigor, and accountability to every project we manage, acquire, own and maintain. To learn more about our industry-leading solar energy solutions, visit dsdrenewables.com and be sure to connect with us on LinkedIn and Twitter.

At IKEA, the vision is to create a better everyday life for the many people by offering well-designed, functional and affordable, high-quality home furnishing, produced with care for people and the environment. Ingka Group (Ingka Holding B.V. and its controlled entities) is one of 12 different groups of companies that own and operate IKEA retail under franchise agreements with Inter IKEA Systems B.V. Ingka Group has three business areas: IKEA Retail, Ingka Investments and Ingka Centres. Ingka Group is a strategic partner in the IKEA franchise system, operating 375 IKEA stores in 30 countries – including 52 retail locations in the U.S.

What exactly does “net zero” mean? And why are so many companies suddenly pursuing it so aggressively?

END_OF_DOCUMENT_TOKEN_TO_BE_REPLACED

How to maximize the federal solar Income Tax Credit (ITC) before it “steps down,” to get the lowest price for solar.

END_OF_DOCUMENT_TOKEN_TO_BE_REPLACED

As #NASEW20 kicks off, renewable energy professionals should prepare for a packed schedule of virtual meetings that will take place this fall!

END_OF_DOCUMENT_TOKEN_TO_BE_REPLACED

Get yours.
I Have a Project for DSD to Acquire.

To request membership to DSD Connect, please complete the form below: (All fields required)