SCHENECTADY, N.Y. (July 6, 2022) – DSD Renewables (DSD) and The City of White Plains have completed the construction of a nine-site, 6.8 megawatt (MW) community solar portfolio, the largest municipal solar energy deployment in Westchester County, New York. The portfolio is expected to generate 8,100 megawatt-hours (MWh) of clean energy annually, tripling the amount of solar energy produced in Westchester County and enough to power more than 700 homes each year. The New York Power Authority (NYPA) was the City’s energy advisor for the project.

White Plains Mayor Roach said, “The City partnered with New York Power Authority (NYPA) and Distributed Solar Development (DSD) to create a successful 6.8 MW community solar portfolio that will not only benefit residents today, but future generations. Public-private partnerships will drive the proliferation of clean-energy projects through New York State creating a robust renewable energy market. I am grateful to NYPA and DSD for their counsel and collaboration during this project.” 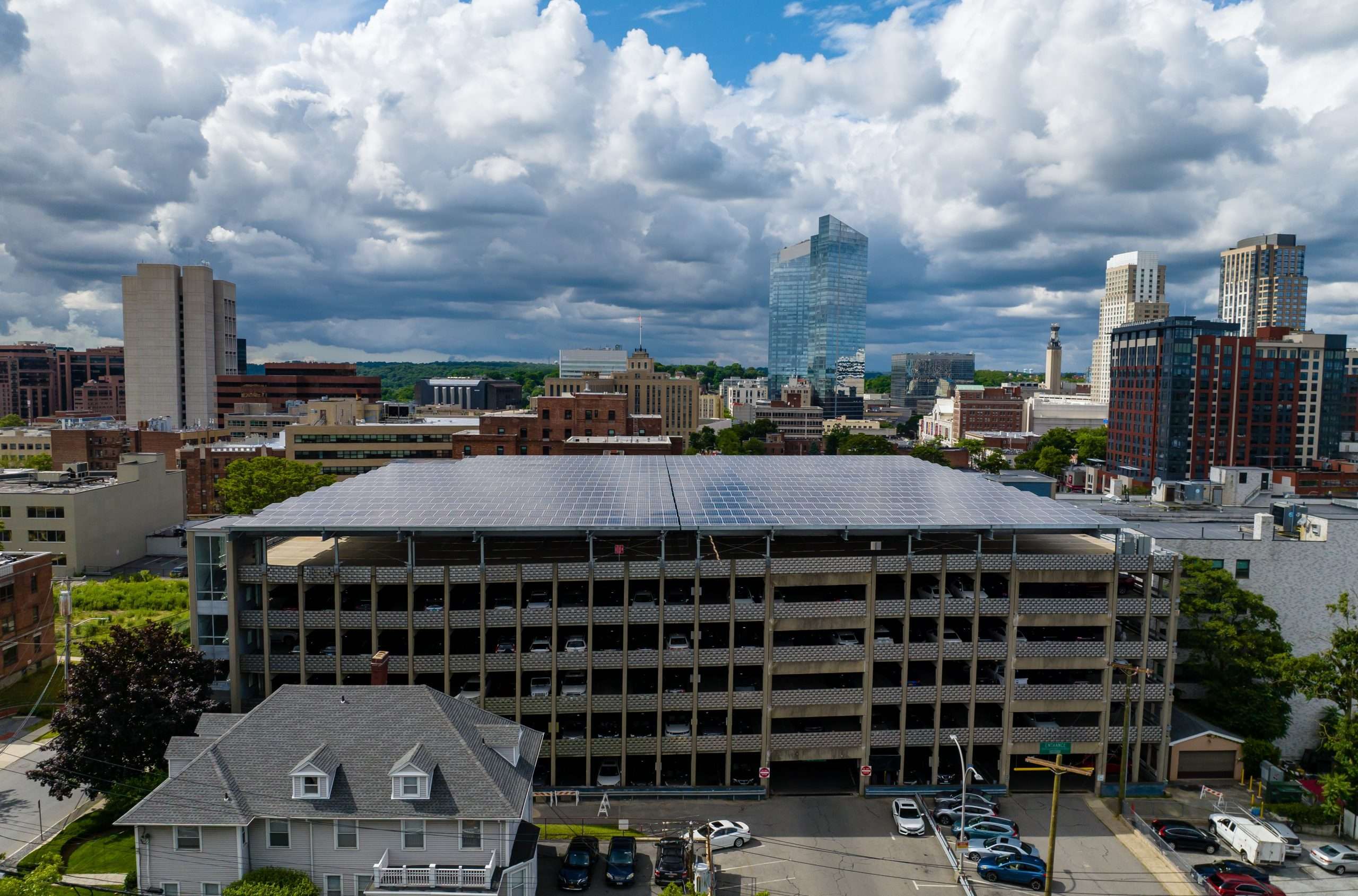 Mayor Roach continued: “We are in a climate crisis and we are obligated to recognize the urgency and take deliberate action to build a sustainable, resilient planet. The City of White Plains will continue to serve as a sustainability leader by investing in and implementing renewable energy initiatives that will meaningfully reduce greenhouse gas emissions.”

The portfolio will generate enough solar energy to power more than 700 homes each year.

The City, as well as residents and local businesses subscribed to the community solar project, will receive a 10% discount for credits applied to their energy bill. Between energy cost savings and lease payments for hosting the systems, the installations are expected to deliver approximately $1M in value annually to the City of White Plains.

The projects incorporated several infrastructure improvements, such as a new roof for the Ebersole Ice Rink and an innovative enclosed solar canopy storage area for the water department, which avoided significant capital spending by the city. The canopies across many sites feature a proprietary integrated water management system that manages water from rain and snow melt.

“We’re honored to be a part of a portfolio that has been so transformational for the City of White Plains,” says David Eisenbud, Senior Director of Business Development for DSD’s Origination group. “Our expertise and design capabilities have enabled us to overcome the challenges of delivering clean energy systems, with such significant energy capacity, to a dense urban area. This unique portfolio positions the city as a leader in solar adoption and shows other communities what is possible when it comes to clean energy.”

NYPA is the acting energy advisor for the project, providing oversight to ensure it’s well-structured and maximizes energy, environmental and economic benefits for White Plains. NYPA also helped the city with the competitive bid process to select a qualified vendor for the comprehensive city-wide project.

“The New York Power Authority is pleased to have played a key role in helping the City of White Plains create an expansive, unique portfolio of solar and storage systems that offer renewable energy to reduce the region’s carbon footprint,” said Justin E. Driscoll, Interim President and CEO of NYPA. “As the commercial hub of Westchester County, White Plains is setting an example for other communities looking to develop alternative clean energy options. Hopefully other municipalities will follow suit and help our state further advance its bold climate action goals.”

The impressive project contributed to Mayor Tom Roach being honored by the US Conference of Mayors during the 2021 Mayors Climate Protection Awards ceremony. The City of White Plains has also received the New York Conference of Mayors (NYCOM) Local Government Achievement Award and POWER Magazine’s 2022 Commercial & Industrial Generation Award.

DSD Renewables (DSD) is transforming the way organizations harness clean energy while building a more sustainable future. With unparalleled capabilities including development, structured financing, project acquisition and long-term asset ownership, DSD accelerates the deployment of renewable energy resources and creates significant value for our commercial, industrial, and municipal customers and partners. Backed by world-leading financial partners like BlackRock Real Assets and rooted in our founding at GE, our team brings a distinct combination of ingenuity, rigor, and accountability to every project we manage, acquire, own, and maintain. To learn more, visit DSDRenewables.com and connect with us on LinkedIn, Twitter, and Facebook.

NYPA is the largest state public power organization in the nation, operating 16 generating facilities and more than 1,400 circuit-miles of transmission lines. More than 80 percent of the electricity NYPA produces is clean renewable hydropower. NYPA uses no tax money or state credit. It finances its operations through the sale of bonds and revenues earned in large part through sales of electricity. For more information visit www.nypa.gov and follow us on Twitter @NYPAenergy, Facebook, Instagram, Tumblr and LinkedIn.

END_OF_DOCUMENT_TOKEN_TO_BE_REPLACED

Installing a solar array at one location can be fairly straightforward. But when it expands to multiple locations, things can get hairy. So, make sure you ask the right questions.

END_OF_DOCUMENT_TOKEN_TO_BE_REPLACED

If you’re planning a solar portfolio across multiple states, you’ll need experienced vendors. Be sure to demand these vital things when evaluating a new solar partner.